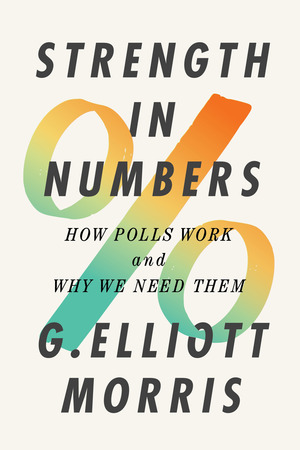 “In this timely book, data journalist G. Elliott Morris provides an essential guide to understanding the deep democratic history of public opinion as a concept and shows readers the real process behind modern political polling.

He takes readers on a tour of polling from ancient Greece to the modern Internet age and artfully explains a crucial scientific tool for understanding society, politics and democracy. Along the way, he makes the case for embracing one of the most overlooked democratic institutions in the United States."

“I can’t count the number of times people have asked me to explain polling and its errors. In the future my answer will simply be, ‘Read G. Elliott Morris’s superb book, Strength in Numbers.’ … A volume rich in useful detail and relevant history.”

— LARRY J. SABATO, Director of the University of Virginia Center for Politics

“Poll-bashing is fashionable, but G. Elliott Morris astutely exposes why they go wrong and how to fix them—to reinvigorate our democracy. The book reads like a suspenseful whodunnit, tragedy and love-story for data… This is a landmark work that everyone who cares about society and politics must read.”

How Polls Work and Why We Need Them

Public opinion polling is the ultimate democratic process; it gives every person an equal voice in letting elected leaders know what they need and want. But in the eyes of the public, polls today are tarnished. Recent election forecasts have routinely missed the mark and media coverage of polls has focused solely on their ability to predict winners and losers. Polls deserve better.

In Strength in Numbers, data journalist G. Elliott Morris argues that the larger purpose of political polls is to improve democracy, not just predict elections. Whether used by interest groups, the press or politicians, polling serves as a pipeline from the governed to the government, giving citizens influence they would otherwise lack. No one who believes in democracy can afford to give up on polls; they should commit, instead, to understanding them better.

In a vibrant history of polling, Morris takes readers from the first semblance of data-gathering in the ancient world through to the development of modern-day scientific polling. He explains how the Internet, and “big data” have solved many challenges in polling—and created others. He covers the rise of polling aggregation and methods of election forecasting, reveals how data can be distorted and misrepresented, and demystifies the real uncertainty of polling. Candidly acknowledging where polls have gone wrong in the past, Morris charts a path for the industry’s future where it can truly work for the people.

More Praise for Strength in Numbers

“A persuasive case for the necessity of polling… Political junkies and policy analysts will savor this informative deep dive.”

“Many Americans may be ready to give up on polls, but through this engaging history of public-opinion research Elliott Morris makes the case that they make our politics better, not worse. And he’s brimming with urgent ideas for how all of us — citizens, journalists, pollsters and politicians — can make better use of a tool essential to a healthy democracy.”

— SASHA ISSENBERG, author of The Engagement

“Pollsters have sustained plenty of criticism in recent decades. Economist data journalist G. Elliott Morris provides a well-reported and thoughtful defense of the polls, while acknowledging their limitations. Along the way, he gives readers a vivid introduction to the history of polling, the major players, the technical evolution of the business, and the challenges the industry faces.”

“In this lively story of the struggles and successes of polling from Gallup to the present day, Morris makes a convincing case that the measurement of public opinion is a key component of modern democracy.”

“A vibrant and compelling intellectual history of polling that will make you a much smarter and savvier reader of all those polls.”

“Strength in Numbers provides an engaging and illuminating journey from the earliest days of polling to the challenges that the survey industry is currently facing. What Morris’s enlightening book shows us is that pollsters have always faced—and ultimately overcome—obstacles in their attempts to accurately capture public opinion. Why should the current moment be any different, especially when we need polls now more than ever to help fulfill the promise of a government that responds to the wishes and demands of its people.”

“Polling is too often discussed as if it were a parlor game, but this books brings us back to its highest purpose: as a way for the people to be heard above the din of elite assumptions. Strength in Numbers is a compelling, accessible and needed history lesson on the place of public opinion in our politics, and a clear-headed rejoinder to the poll-bashers.”

“Readers with a bent for statistics will take interest… Morris makes a solid case for polls as tools to give voice to the people while allowing that improvements are needed.”

You can read more about the book in the archives of my blog.

To schedule any events, please email Rachel Salzman at W. W. Norton at rsalzman@wwnorton.com, or fill out the contact form at the bottom of the home page.

For queries regarding rights please contact my agent, Lisa Adams at the Garamond Agency.

(If you’re visiting my website for the first time…)

G. Elliott Morris is a data journalist and US correspondent for The Economist, where he writes on a range of topics including American politics, elections, and public opinion. He lives in Washington, DC. This is his first book.